This post deals with a new Swedish technology which converts wave power more efficiently into electricity. It is tested at the Orkney Islands in Scotland and provides a great opportunity for places with high waves altitutes as it uses buoys.

The technology is about the up and down movement of the buoys due to the waves. With several gears this movement is converted into a turning movement. This is used for producing electricity with a generator similar to those windpower stations use. The picture illustrates the production process:

Due to the efficient process one buoy has a performance of 250 kW in the atlantic ocean, which is up to five times more than other wave power systems can offer. Therefore it needs e.g. 32 buoys for replacing a wind power of Siemens.

Additional advantages of this invention is that has up to three times more of the annual energy output compared to conventional absorbers.

As about 20% of the human electricity could be produced with wave power this technology sounds promising for application on a high scale, e.g. farms of several of hundreds of these buoys. 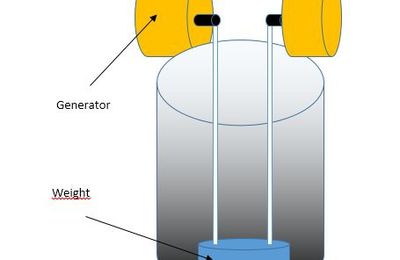 Solar thermal and photovoltaic in one panel